But just being Spider-Man is one part of the formula. There's more to being Spidey than just swinging across the city. Shacknews got a taste of that formula after going hands-on with the first couple of hours of Insomniac's upcoming superhero action game. 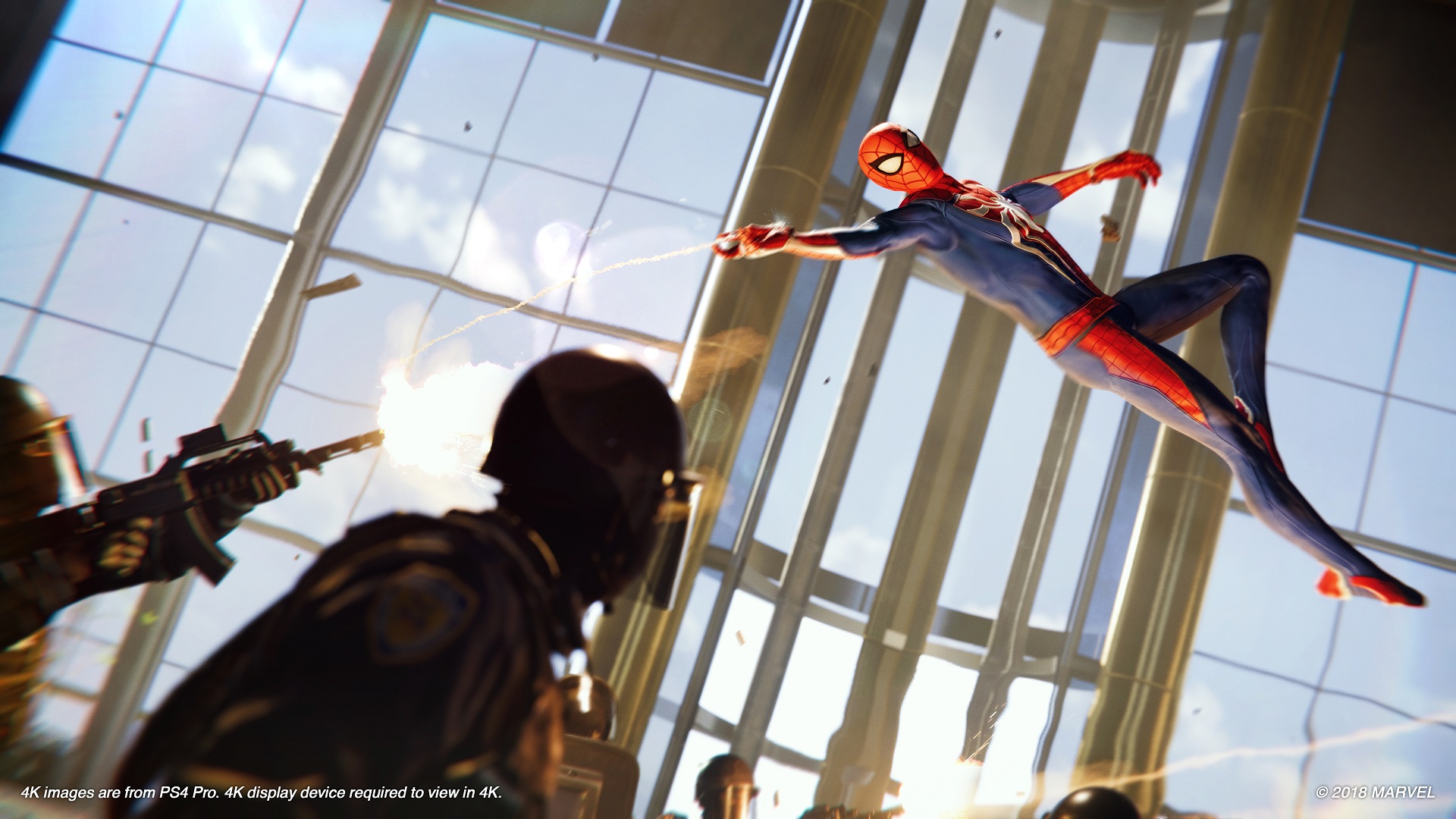 It's easy to tune out the opening tutorial mission, because of how vast the city of New York looks and feels. But it doesn't truly feel like a playground until Spidey starts swinging for the first time. The locomotion is incredibly fluid, with Spidey able to swing, runs up walls, and boost forward with a slick smoothness that hasn't been present in Spider-Man games in years.

As much fun as it is to swing around the world endlessly, the tutorial mission does start, establishing that this is a veteran Spider-Man. Peter Parker has been New York's guardian for eight years, fresh off his college graduation. He's in constant communication with the police dispatch radio and has a direct line with NYPD Captain Yuri Watanabe, who informs him that the police have Wilson Fisk dead to rights and have him cornered in Fisk Tower. But this being the Kingpin, Fisk isn't going down without a fight and has the police on the ropes.

Spidey's mission is to catch Fisk before he can escape, which introduces the game's combat mechanics. Anyone familiar with other superhero games, like the Arkham Asylum games, will be pleased to see the crisp combat at work. Spidey can punch out baddies with long-string combos or switch back-and-forth between enemies, while his Spider Sense gives him cues to dodge incoming danger, like fists or high-impact rockets. Webs can be integrated into combos, with weakened enemies able to be webbed to walls and floors outright. Players can also grab nearby objects with webs and swing them right into foes. As Spidey builds up his combo bar, he can use the full bar to either heal himself up or use it as a one-hit kill on enemies. 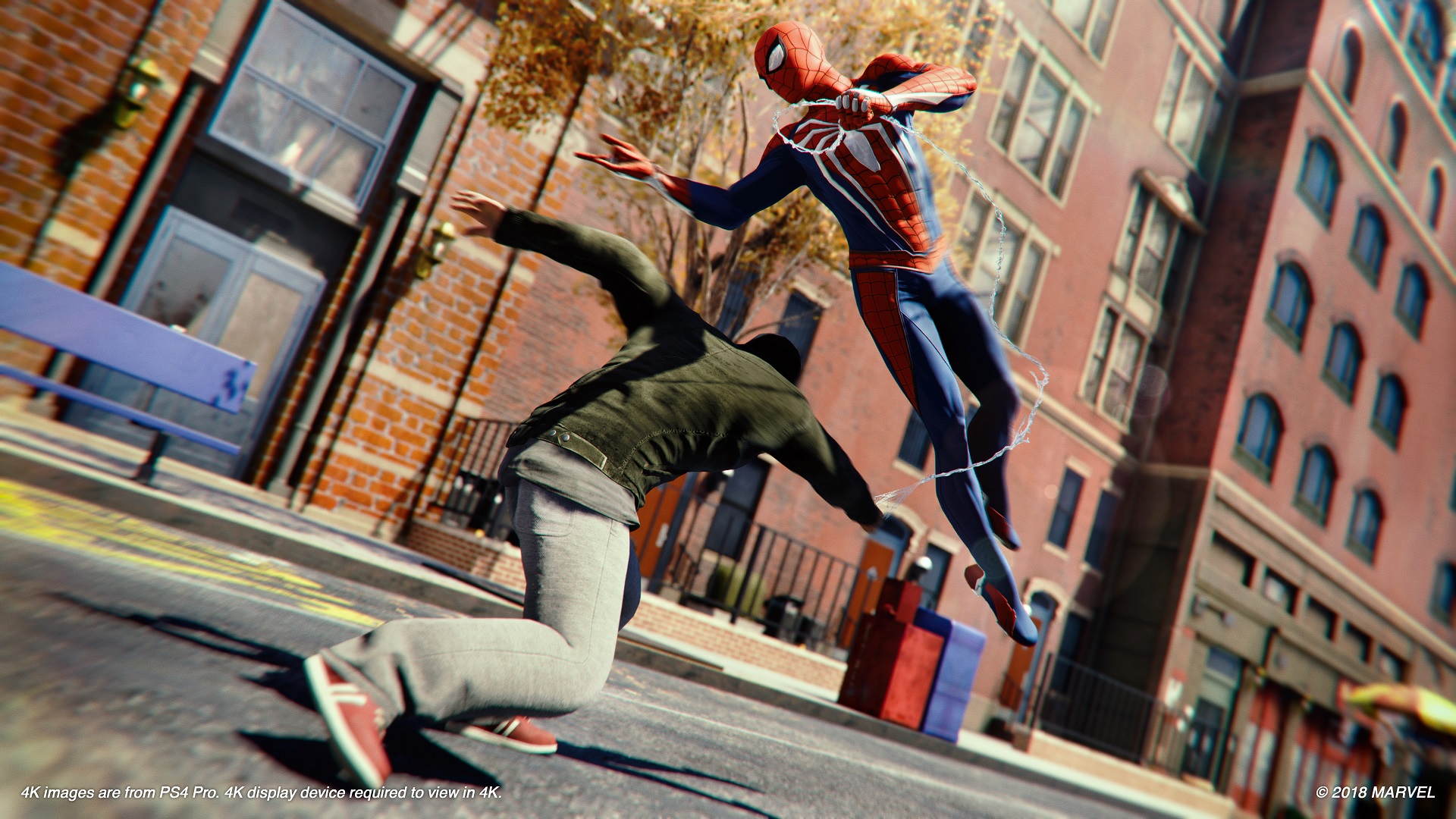 Eventually, Spidey catches up with Fisk, who muses about the eight years that they've been adversaries. This segues into the game's first boss battle, in which Fisk charges like a raging bull. He can only be slowed by Spidey's web shots, at which point he becomes open to combos. It's a good warm-up for similar enemy types that will appear later in the game.

Once Fisk is taken down, his apprehension opens up an interesting quandary. Fisk points out that with his clout in the underworld, he kept much of the criminal element in check. Because nature abhors a vacuum, Fisk's absence would open the door to lesser criminals to try and take his place.

Sure enough, as the game goes on, Fisk proves to be right. Petty crime is heavily on the rise across New York, with Spider-Man given the option to stop these thugs. Examples of crimes that will pop up include muggings, jewelry store thefts, drug deals, and even high-speed chases. To this point, the resemblances to Activision and Neversoft's classic Spider-Man 2 were noticeable, but this was where I started to see some improvements from that game. Spidey wasn't wasting side-missions on fetching balloons or delivering pizzas, he was actually being a hero. There's also a separate set of side missions involving construction sites acting as fronts for Fisk's criminal dealings. These begin with Arkham Asylum-style stealth missions, with Spidey able to score various web-based takedowns without being detected. However, these will quickly break down into wave-based ambushes, putting players through more of an endurance test than anything else. 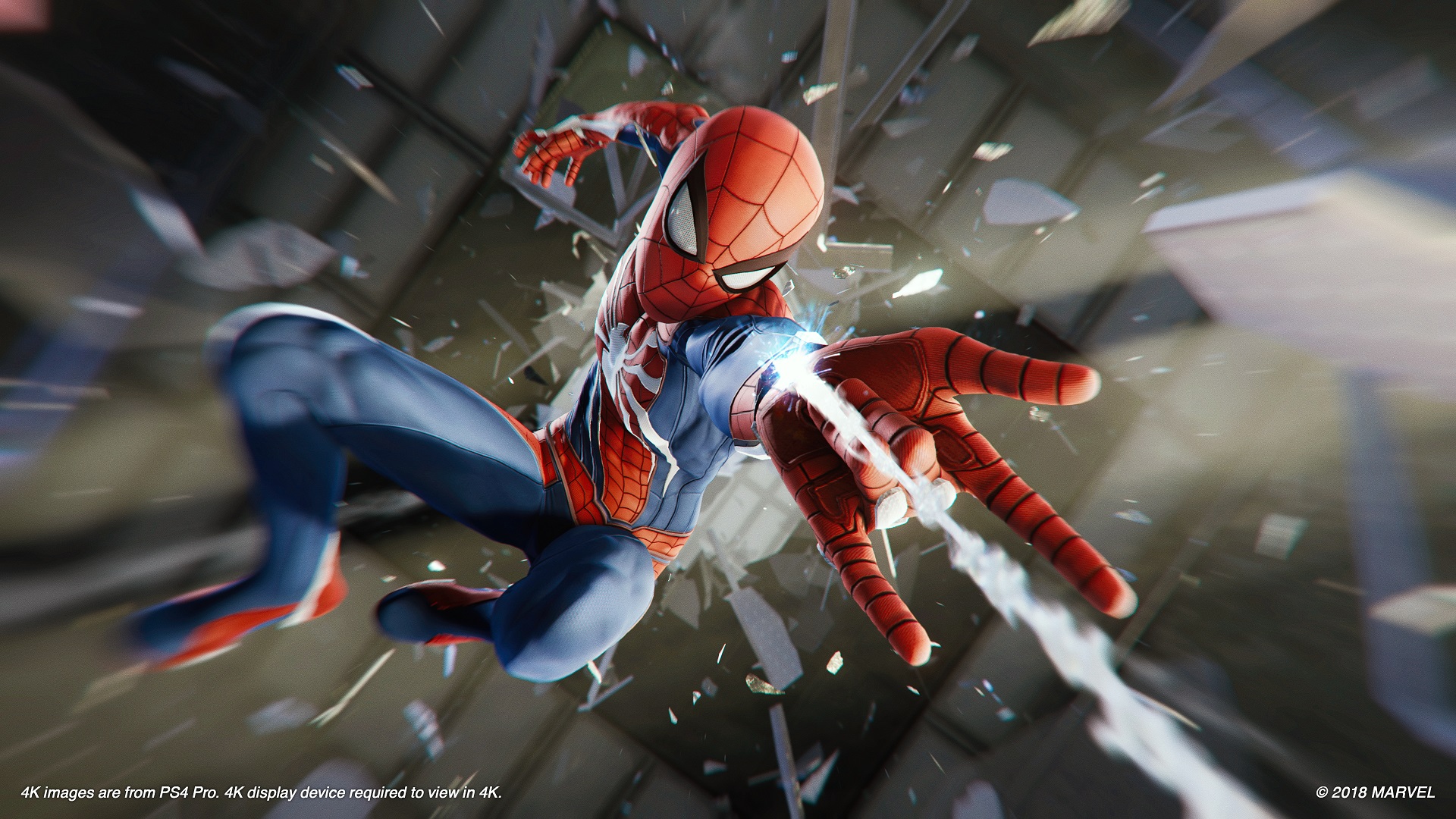 The side content is plentiful, going beyond the aforementioned petty crimes. Players can track down old backpacks that Spidey lost track of over the years or take pictures of landmarks, with each side mission awarding XP and special tokens to help upgrade his abilities and his suits. There are dozens of suits available over the course of the game, each with unique traits and special moves. As useful as it was to refill my combo bar quickly, there was something fun about using the classic Spider-Man suit to web up all lesser enemies on-screen almost instantly. For those who want the powers and also to pick out their own fashions, suits and suit powers can be mixed and matches as the new suits are unlocked. Further on the subject of side missions, I couldn't help but notice that even with dozens of collectible types to collect, I couldn't help but notice that the pause menu had a lot of "LOCKED" collectibles, indicating that there's far more that wasn't in the demo that will be out there for the full game.

All of it can be a little tough to find, which makes it helpful that players can upgrade the city's cell towers. Located across New York, Spidey can fix up any towers with amplification-matching mini-game. Any repaired towers can help show off the locations of any nearby collectibles.

As for the story, Fisk's arrest also opened the door to a new villain. Players get to meet the underlings of Mr. Negative, who are seeking out certain items still in Fisk's possession. One of them is in the local museum, with a collection donated by Fisk. This is where players are thrown into a hostage situation and tasked with getting through all of these foes silently. This is a more intense version of the construction sites, with Spidey having more limited space to work with. Although he does have vents he can crawl around in and help aid in his takedowns. 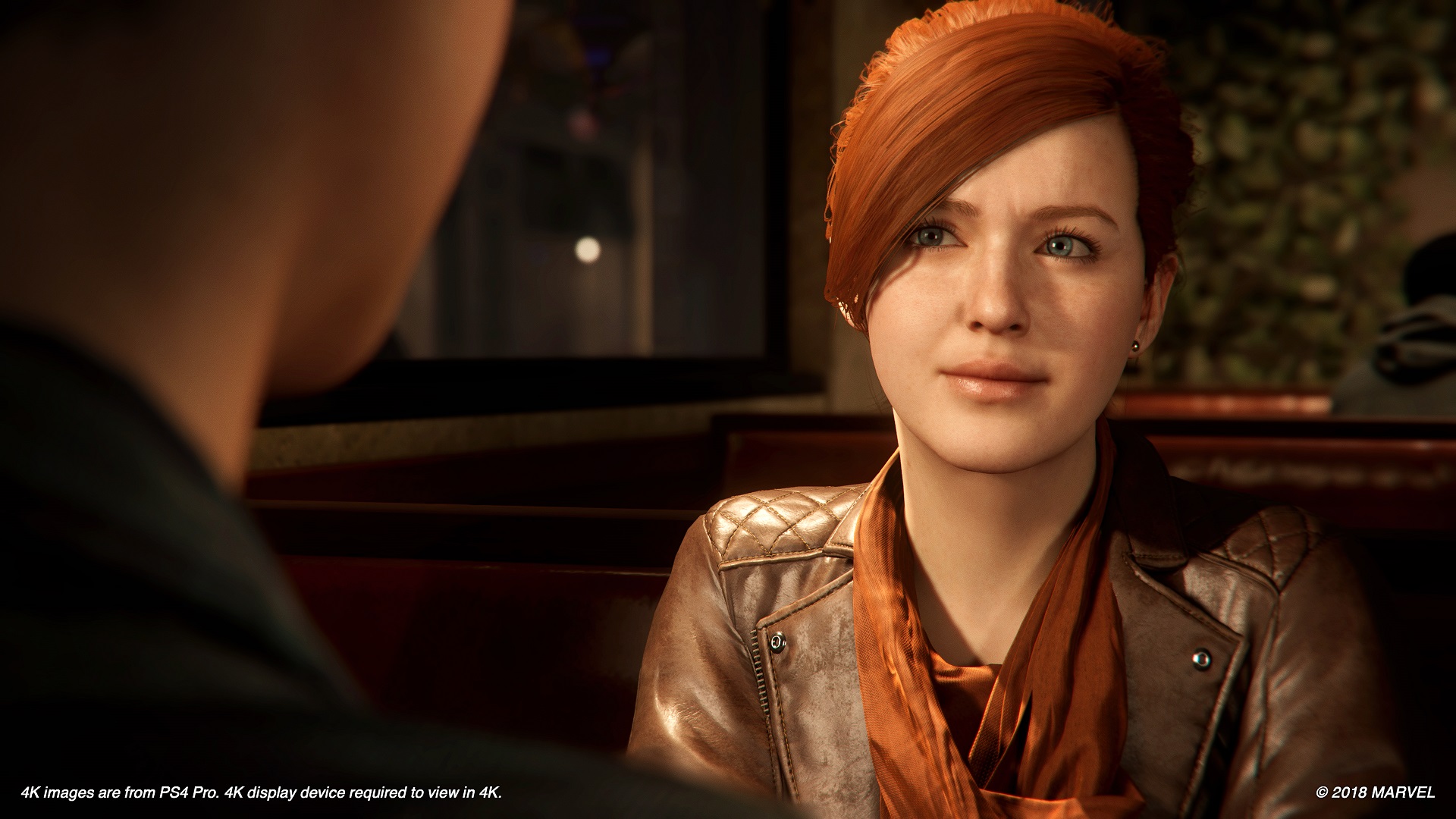 This scenario also introduces Mary Jane Watson, with the game quickly establishing that she's aware of Spider-Man's identity. However, Peter and MJ have been on the outs for at least six months, so while they're still friends, they're not so much an item anymore. Peter and MJ's first meeting segues into the first of the playable Mary Jane Watson missions, which flashes back to show how the museum heist began.

The MJ mission is more about stealth, information gathering, and photography. She's there to take pictures of Fisk's collection, but is also looking to find certain secrets about the museum being a front for illegal activity. The toughest aspect of these missions involved sneaking past the curator to get into a locked room filled with secrets. There's no combat in MJ's missions, at least not yet. A cutscene showed she's more than willing to take down a bad guy herself if she has the tools available to her, so there may yet be a stealth combat scenario coming for Ms. Watson.

All of this is a small sample of what players can expect with Marvel's Spider-Man, which is looking more and more like all of the best elements of the classic Spider-Man 2 mixed in with the free-flowing combat elements of the Arkham games. With a glut of side content and a massive city to explore, this is looking to be one of the biggest Spider-Man adventures ever made. Even after four hours, I still didn't even scratch the surface of Spidey's rogues gallery, which gives me the idea that this is going to be quite the lengthy story. And the more story, the better, because the most memotable Spider-Man tales are the ones that squeeze in the best of Spidey and the best of Peter Parker.

Marvel's Spider-Man is almost ready to swing in. It's set to release exclusively on PlayStation 4 on September 7, along with a special PS4 Pro bundle.