Apex Legends players can soon participate in a new event.

Starting next week, the Chaos Theory Collection Event will kick off in Apex Legends and brings with it a raft of changes as well as the release of the game on Switch.

The event focuses on Caustic and finds the new Caustic Treatment standing where the Water Treatment once stood. Players will act as Cauctic’s “test subjects” and will be draining toxic liquid from the center of the facility. Doing this temporarily grants access to four gold loot items locked in cages.

The Mirage Voyage is also missing, but it could show up in an arena where and when you least expect it.

Then there’s the Ring Fury Escalation Takeover and new “Heat Shield” item and accompanying Survival Slot in the player’s inventory.

Ring Fury is a new playlist takeover that follows regular BR rules, but each round, one or more Ring Flares will appear on the map within the current ring. Ring Flares are expanding pockets of the Ring within the Arena which expand slowly. Those who get caught will take damage equal to the damage dealt by the current round’s Ring. A short warning will appear on the map and minimap before the Ring Flare appears. If you get caught in one, you can drop a Heat Shield to avoid damage. Players will start out with one in their inventory but can always find more throughout the map.

Heat Shields cast a dome enabling players to loot or revive, for example. The use of healing items is sped up by 50% and the speed of Revives is increased by 25%. That said, the Heat Sheild will degrade if damaged by the Ring, so don’t expect it to last long.

After the Ring Fury Escalation Takeover concludes, the Heat Shield will remain in the game as general ground loot. These also don’t take up an inventory slot, as they will be held in a Survival Slot. As the heat shield, the Survival Slot itself will continue to be available in the game after the event ends.

Like previous playlist takeovers, Ring Fury will replace regular Duos and Trios playlists for the entirety of the Collection Event. Ranked will not be affected. Unlike previous takeovers though, Ring Fury is an “Escalation Takeover,” so by the end of the event you can expect five different stages of escalation. 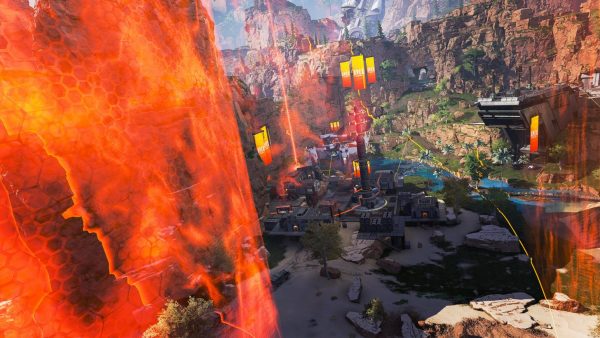 Then there’s No-Fill Matchmaking, which is a new way to play as a solo Legend. In the lobby, you’ll see a checkbox entitled “Fill Matchmaking”. This means the matchmaking system will attempt to fill your squad to Duos or Trios and will be the default setting after every match you play. Unchecking this box and clicking Play will send your party into your selected playlist without filling your team with other players. In other words, if you solo queue into Trios, with “Fill Matchmaking” unchecked, you’ll go in alone against teams of three.

With the new event comes rewards. Players can earn 1,000 points per day and challenges refresh daily. There are also stretch challenges that reward four unique badges, and all will stack with the Battle Pass. Chaos Theory also introduces a new set of 24 themed, event-limited cosmetics. All 24 items will be available through direct purchase for Apex Coins or Crafting Metals and in Event Apex Packs. If players collect all event items, they will unlock the Bangalore Heirloom set.

After the event ends, the Bangalore Heirloom will become available via heirloom crafting.

If you head through the link, you can look over some Legend and weapons updates, quality of life changes, and bug fixes coming alongside the event.

The Chaos Theory Collection Event will start on March 9 and run through March 23.