In Monster Hunter Rise, the Rampage comes at you fast.

With a face full of Pukei-Pukei poison and a sumo-wrestling hippo belly-bopping my front door to pieces, my hunter glacially lifts an antidote to his lips just in time to see two more monsters scale the fence in search of mischief.

Maybe it’s just not my day.

Built from the ground-up for Nintendo Switch with Capcom’s RE Engine, Monster Hunter Rise is a condensed experience, but not necessarily a reduced one, ticking all of the necessary boxes of a modern Monster Hunter, while scaling back some of the scope to deliver a tighter package on a less powerful machine.

Where a lot of action games try to make their combat as fluid as possible, Monster Hunter Rise is content to flow as smoothly as frozen nutella spreads, with the same idiosyncratic chunk to all 14 weapons that gives the series its distinctive handling.

As always, supping a potion feels like brewing a pot of tea, as your character ambles out of the way of whatever huge and onrushing beast has caused you injury in the first place with all of the urgency of George Martin writing the last Game of Thrones books.

It sounds like a nightmare, but in practise it makes for painstakingly deliberate, unblinkingly intense scraps that’re satisfying hefty in just the right way when you eventually click with the right weapon for you. 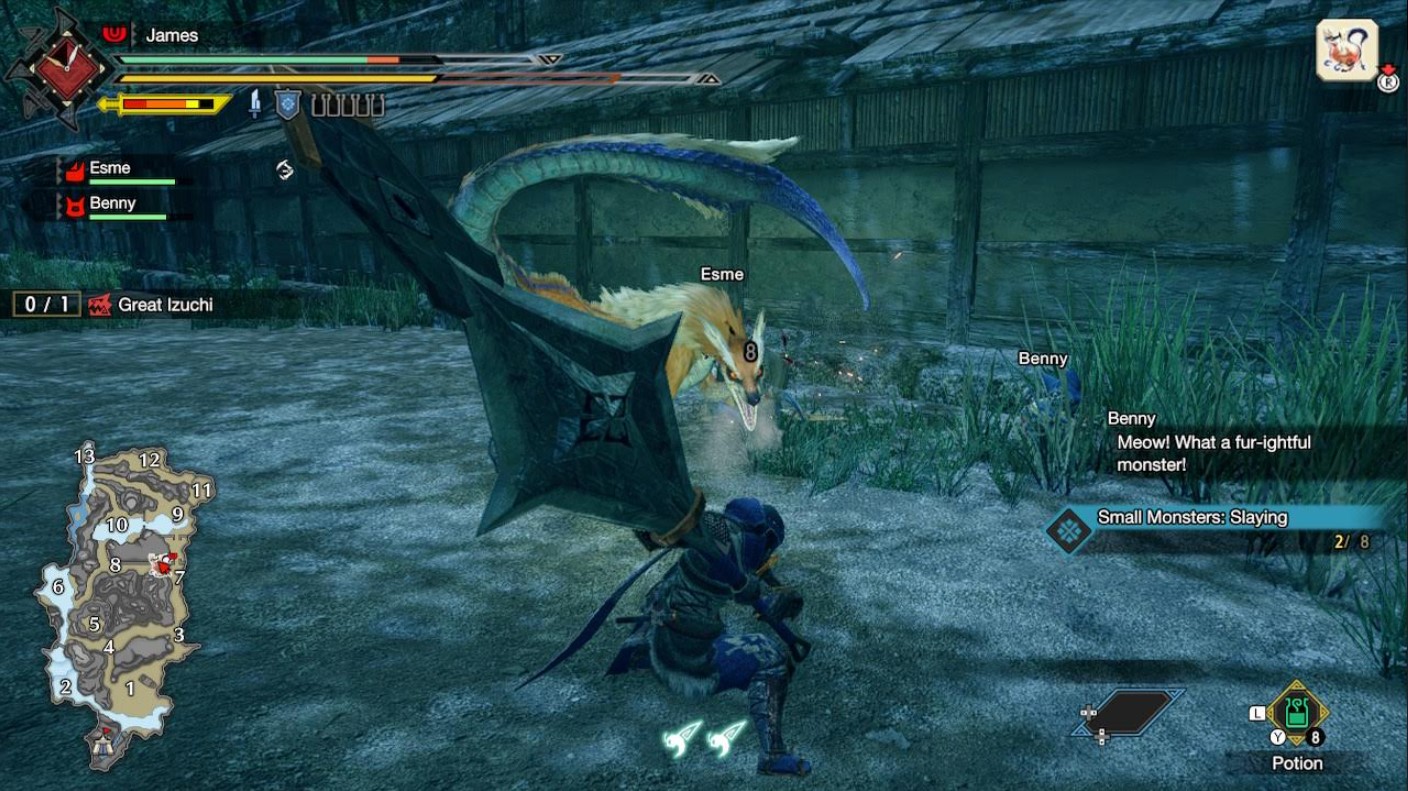 However, the new Wirebug zipline ability, which has been added for Monster Hunter Rise, adds a bit more freedom, momentum, and impetus to your mobility.

By holstering your weapon and holding the left trigger, you can shoot out a Spider-Man-style silk string which pulls you in any direction – including up into the air. It’s a powerful tool for closing the distance with more agile monsters, escaping a sticky situation, or lining up a strong aerial smash which softens up a wyvern for riding.

Between this and the two unique and flashy Silkbind attacks for each weapon, the Wirebug opens up loads of options for your character not just in combat, but exploration as well, where you can sling yourself into scenery and wall run to higher ground in search of rare materials and secrets.

It feels like a lot of what’s new in Monster Hunter Rise is to do with mobility.

The aforementioned wyvern riding, which lets you mount a monster that’s been stunned with Wirebug attacks or through a turf war with another roaming beastie, is deceptively flexible – letting you charge nearly the full way across the map to square up to your target.

Yes, it does feel like there’s a full three-second delay between pressing the attack button on the back of a monster and anything happening, but it just wouldn’t be Monster Hunter if you weren’t locked into a grand animation at some point.

Then there are the new Palamute buddies – ninja dog friends to me and you – who you can saddle up and ride about whenever you’re in need of a speed boost. 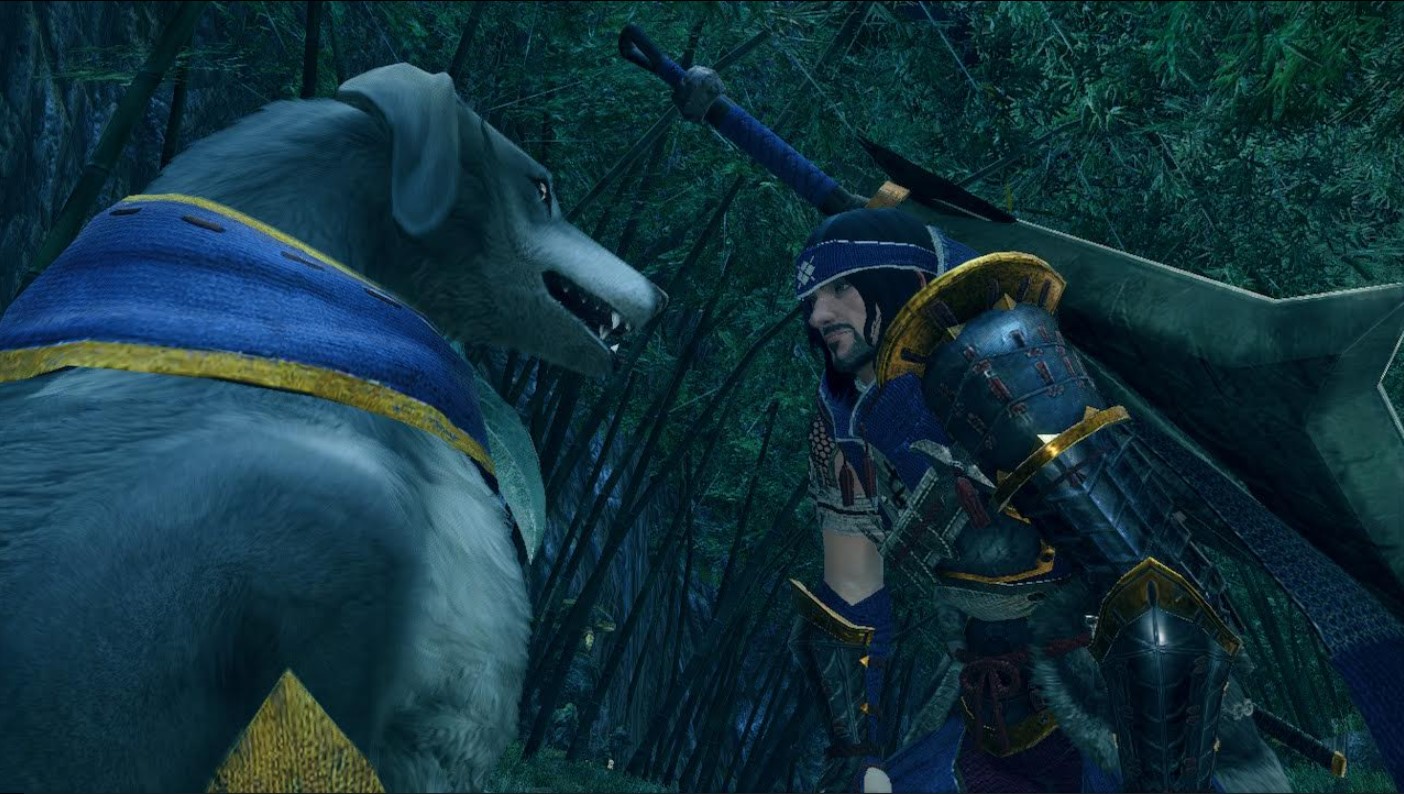 Beside being incredibly cute, with loads of adorably functional equipment sets for both your doggo and traditional palico cat helper to craft, your buddies are useful partners in battle. You can deck them out to be healers, distract monster aggro away from your hunter, or just focus on extra damage with behavior sets which actually feel like they make some difference.

Between these three additions, Capcom has functionally solved the issue in previous games where you had to trudge around wide-open spaces from encounter-to-encounter or to farm materials, without any one thing feeling too overpowered.

A place to call home

The story in Monster Hunter Rise is light, but the framing and characterisation of Kamura Village is one of my favorite things about the game.

Where Astera in Monster Hunter World felt flat and empty despite its size, your home in Monster Hunter Rise feels emblematic of the game as a whole: condensed to include the series’ fundamentals with not a whole lot else.

During the main story there aren’t any purpose-built set-pieces like when you fight Zora Magnaros in Monster Hunter World. In fact, every main mission you embark on is a standard hunt or Rampage. But again, this stripped back presentation isn’t much to the detriment of Rise.

It feels like Capcom has conceded that you’re coming to Monster Hunter for deep and nuanced combat, not a deep and nuanced story, and focused on creating somewhere sweet and cosy to kick back between missions, rather than anything more character-led. This extends to the hunts themselves where the sedate tracking feature, where you’d have to collect clues pointing you towards a new wyvern’s location, has also been shelved in favor of a simple map marker. 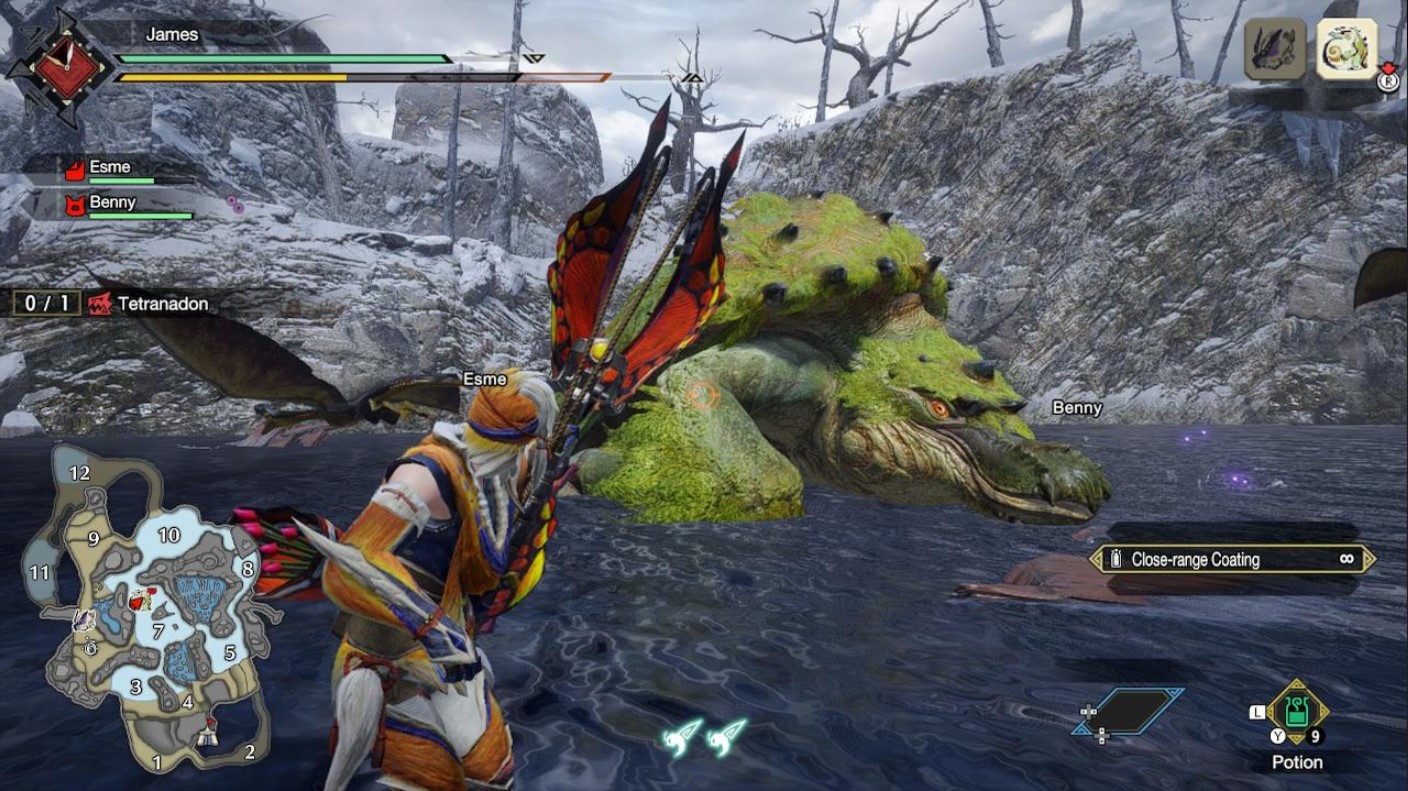 A commonly accepted factor in Monster Hunter World’s breakout success in the West was accessibility, with a greater grounding in complex mechanics offered to new players from the start. Monster Hunter Rise feels like another step in this direction, with your journey towards rolling the game’s initial credits – past which there are several completely different monsters introduced – feeling noticeably easier than previous entries in the series.

To continue comparisons to World, it doesn’t feel like there’s anything as tough as Anjanath in the Ancient Forest or Diablos in the Wildspire Waste through the whole of Monster Hunter Rise’s main story. This time around, the real big boys don’t come out to play until very close to the end.

While not boring by any means, it does make for a stronger difficulty spike instead of hitting more consistent walls. It’s an interesting design choice that definitely settles you into the rhythm and familiarises you with the skill set of hunting more smoothly, but could feel like a grind for returning players looking to tax themselves from the off.

However fans of Monster Hunter’s more impenetrable systems needn’t worry too much about any dumbing-down. Things like the inscrutable crafting system remain as bulletproof as ever – albeit with the ability to rollback unwanted upgrades to reclaim your spent materials.

The wyverns in Monster Hunter Rise are brilliant.

Each archetype feels so unique, so expressive and majestic that it feels utterly terrible to watch them gammily limp away in injured retreat or cry tears why you break one of their material parts.

There only feels like a couple of really obvious economic reuses of animations – a charge here, a paw-swipe there – but it does a lot to keep the same revisited areas fresh when you’re fighting multiple different monsters in a single mission.

The environments themselves look less brilliant, and this is one of the places that you can tell you’re playing on a less powerful machine. Textures can look muddy and lack detail up close which is further lost at a distance. 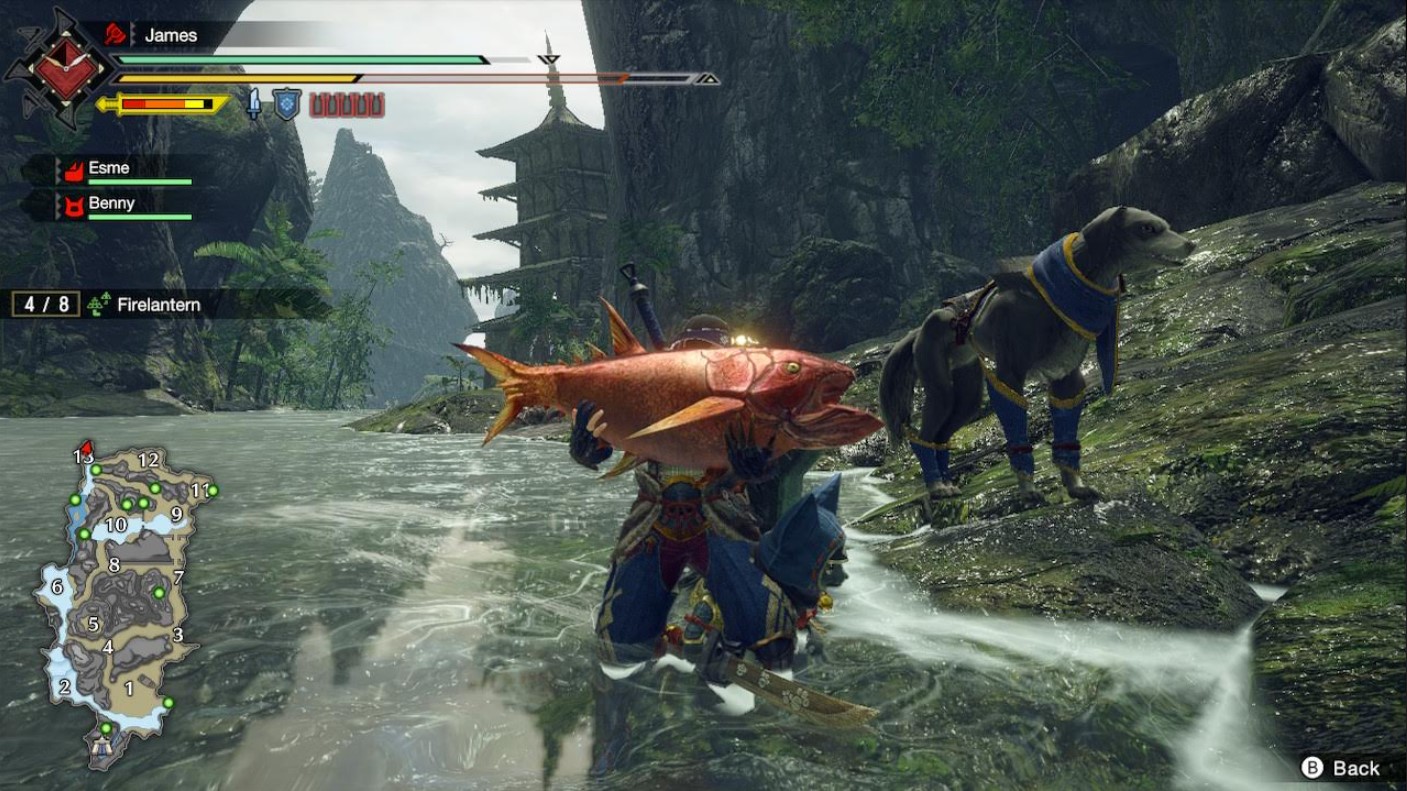 However, docked and handheld performance has remained solid throughout the entirety of the main story and beyond I’ve played.

With that said, even on a stock Switch things in handheld mode look very, very small, and it’s tough to discern the subtle animation cues of monsters’ attack patterns and focus on the finer points that’re key to success in Monster Hunter.

A traditional console experience suits the marquee fights more naturally, but the option to take farming runs or other expeditions into handheld mode does help Rise feel less grindy.

Finally, the biggest new addition in Monster Hunter Rise is Rampage mode, where you defend the gates of Kamura Village from waved onslaughts of multiple monsters at a time.

It plays out like a tower defence game, where you position auto-firing ballista turrets and cannons, along with special units and bombs, to slow the encroaching advance of big beast after big beast.

I really didn’t like playing Rampage at first, where I felt like the protracted chunk of Monster Hunter animations meshed horribly with the frantic plate-spinning required to keep on top of the assault. 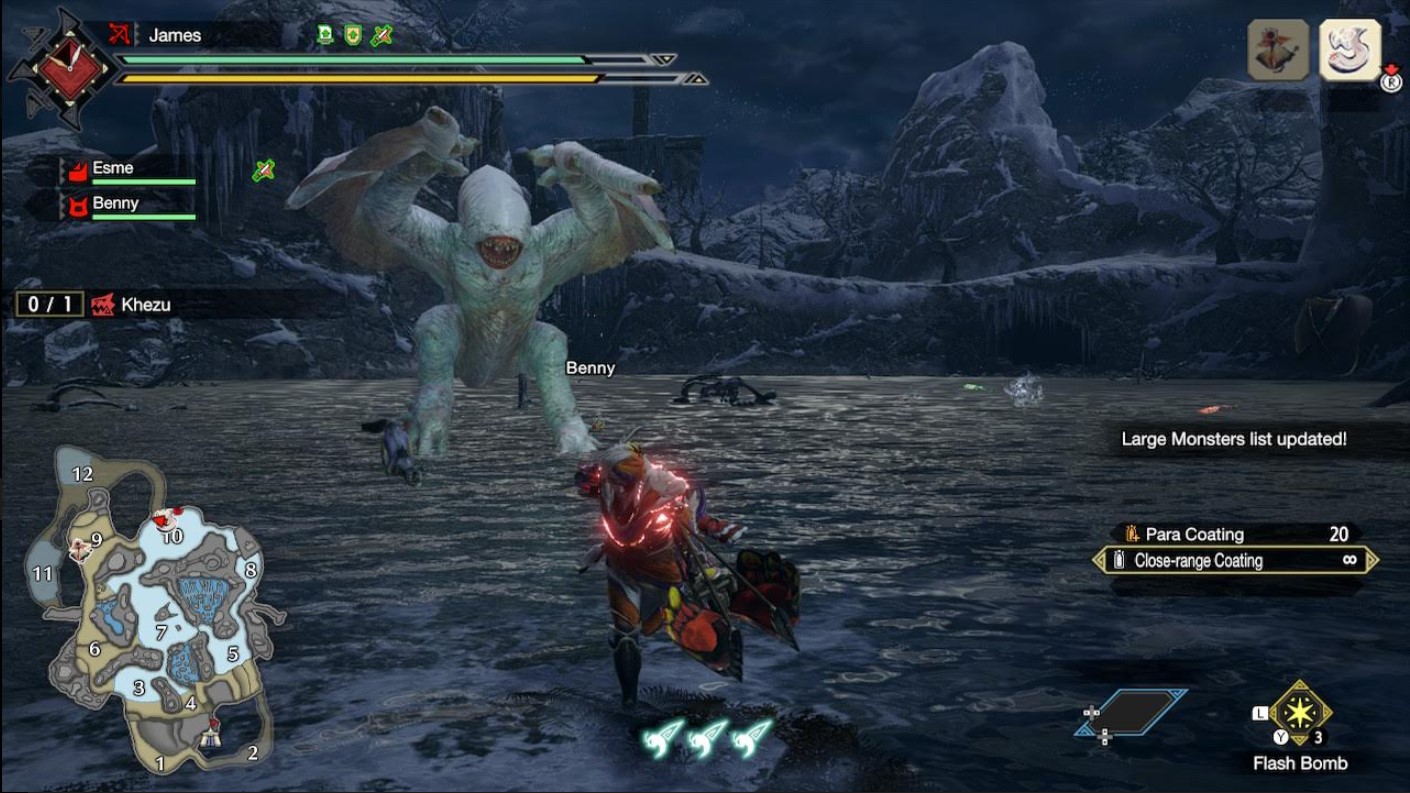 For example, as I mentioned in the intro, getting poisoned by a Pukei-Pukei is an absolute disaster, since you have to spend an eternity putting away your weapon, cycling to an antidote, pressing to drink it, sniffing the cork of the bottle, writing flavor notes on the vintage, swirling it around in your palm to warm the aromas, before finally sitting down to drink it with a four-course meal.

All the while your mates are getting battered by the kind of wyverns that target your installations, your defences are being mauled by the kind that monsters that break everything, and flying monsters just generally make a nuisance of themselves.

Rampage has grown on me a lot as a good source of rewards and an alternative way to gather resources for many different types of monsters at once – especially as it’s a much easier and ironically less intense way of farming difficult monster types.

Then there are the unique Defender Ticket rewards, which give powerful ‘Ramped Up’ buffs to literally every weapon in the game, so it’s well worth the distraction.

Ultimately, Monster Hunter Rise is a solid, standalone entry to the series which pulls back on the scope of recent games on more powerful platforms, but doesn’t skimp on the fundamentals that made the Monster Hunter name.

While it does feel like a smaller package in terms of grand story presentation, the new additions and quality-of-life fixes make it less grindy to play, with greater flexibility in exploration, navigation, and resource collection adding to the portable possibilities.

With just five locales to house the vast roster of creatures though, it will be interesting to see whether Rise can have the same long-lasting appeal as its predecessors. More monsters have already been promised, with the first free post-launch drop slated for April 2021.

Monster Hunter Rises roars onto Switch on March 26, a PC port is planned for 2022. Tested on original Nintendo Switch with Joy-Cons, code provided by publisher