This Fanged Beast-type monster uses fruit to throw at you, and inflict various blights, all the while prancing on his tail, goading you. Not a nice experience. Luckily, you can find out how to beat this monkey into a fruit-pulp and defeat Bishaten in Monster Hunter Rise.

How to Beat Bishaten in Monster Hunter Rise

To get the edge on Bishaten, there are a few things that you need to remember:

Unlike many other monsters, you won’t need to gear up for any special or specific resistances before taking this quest.

However, you will need to make sure that you have upgraded your starting armour set to something slightly beefier. The Barroth gear is a great option for this point of the game, and will offer some decent resistance against the next tier of beasts to come, including the Bishaten.

On the other hand, if you’re able to make any Ice element weapons from the Arzuros for your specific weapon, be sure to do so as the Bishaten is weak to Ice. You could also use the bow from the Bnahabra (Ice) tree.

Bishaten is also weak to Blast, but unless you’re looking to fight it in High Rank, it’s unlikely that you will have any access to High Rank gear quite yet. 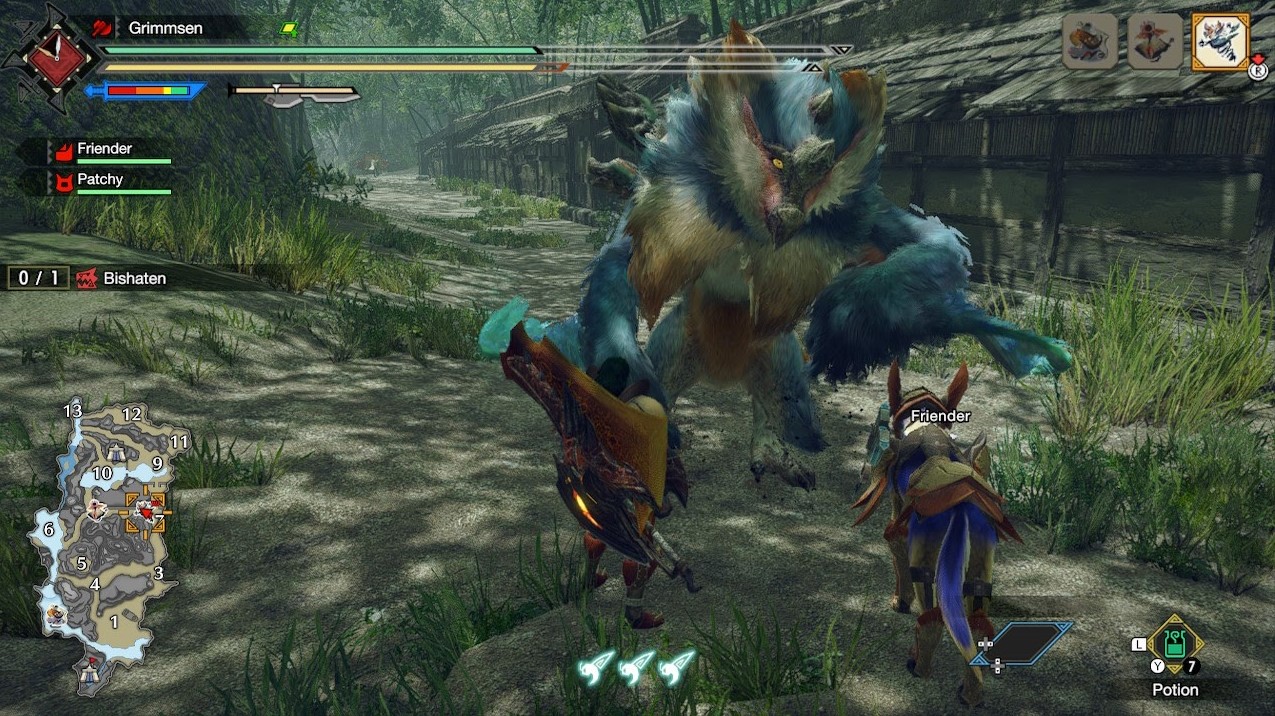 With that in mind, be sure to equip yourself with both Antidotes, as Bishaten is able to throw poison fruit at you. After that, be sure to eat Bunny Dango for Dango Defender, Medic and anything else that might help you for this specific fight, but those two alone should help you significantly. With all the prep done, you’re ready to face the beastly Bishaten.

After kicking off the quest, collect your items from the Supply Box and head to Area 9 in Shrine Ruins, there you’ll find both Bishaten, and a Tetranadon- if you’re particularly lucky.

From here, the Bishaten should still be toppled, so get in a few attacks before it gets up.

Bishaten has a tricky moveset, and can catch you out if you’re not careful.

If you’re attacking, it can do a tail whip, which can send you flying, so be sure to use Wirefall (ZL + B) to get stuck in. We recommend staying either directly in front of the Bishaten, or gunning for its tail, instead.

It can still follow up with these attacks, and even follow up several tail whips at once, crossing the area. On occasion, Bishaten will even wait for a moment to bait you into an attack before going for a tail whip combo, thrashing around in the process.

The best way to deal with this is to keep a keen eye on the positioning of the monster, and see if it’s balancing on its tail. If it is, it’s likely that it’ll go for a tail whip combo. It might even wind up an attack animation, before feinting and doing something completely different.

One thing up the Bishaten’s sleeve is the possibility of it throwing one of its fruits at you. 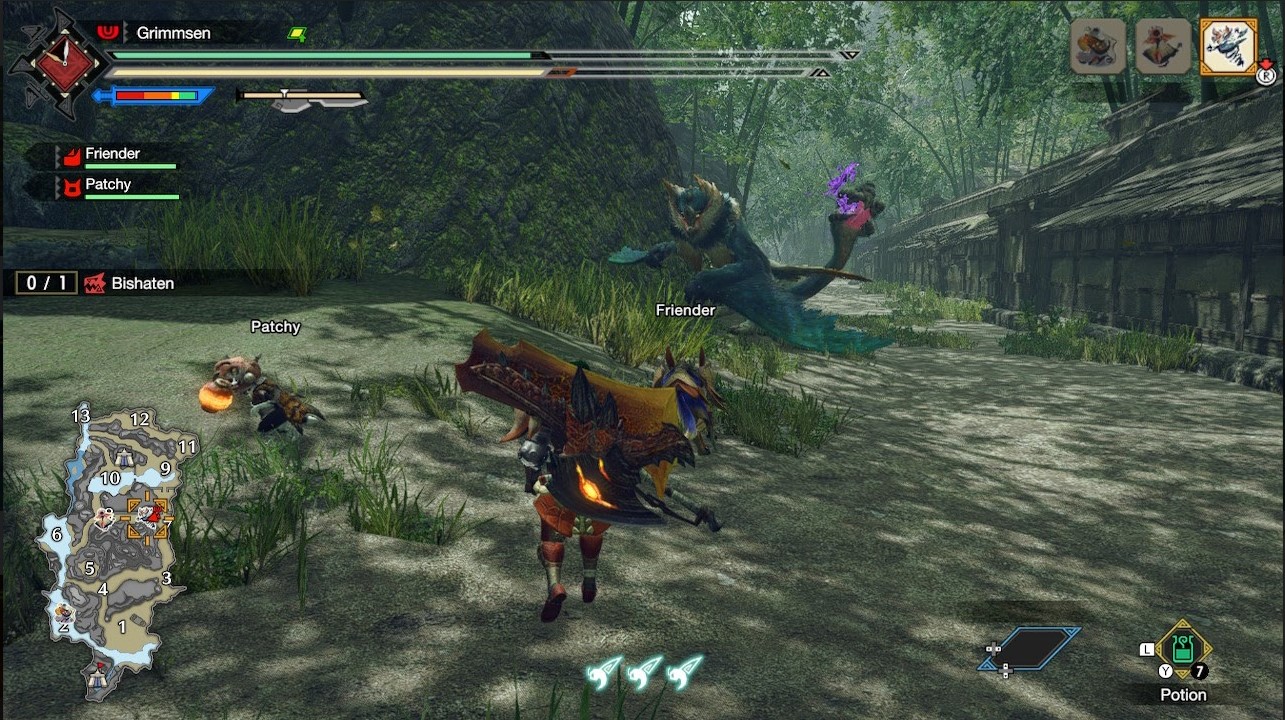 These can range from a single poison fruit, which you can easily spot because of its purple aura. Or, you might notice the monster covering its eyes, in that case, it will then throw a fruit at you which will cause a flash, and make you dizzy if you’re not far away enough.

If it rolls this one out, either run away or turn away from the Bishaten to not be hit by it.

That’s not all for the Bishaten’s fruit-filled festivities, it can also throw a flurry of them towards you, mostly dealing either physical damage, just be careful of the purple poison fruit that it’ll also throw at you.

If you manage to attack it enough while it’s stood up, winding up this attack, it’ll get toppled and drop a flurry of fruits around it. The Poisonfruit can be thrown to poison the Bishaten and deal a decent amount of damage, and the Jumbofruit can be consumed to restore a little bit of health.

The poison damage from throwing one of the poisonfruits is not small, so be sure to aim correctly when you throw them. But, beware, while stood up on its tail, the monster can also spin on the spot.

After taking some damage, it will move zones over to area 7, where it’s likely to stick to one of the walls, and throw fruit at you from there.

This is a prime opportunity to use something like a Flash bomb, which will send it crashing down, and leaving it open to be punished. The Bishaten’s tail is consistently exposed throughout the fight, and be sure to focus your attack on that, as it’ll dish out significantly more damage than attacking its body.

The Bishaten has the potential to combo you with its tail whips, if you’re not careful, but once you’ve managed to exploit all of its attacks, you shouldn’t have too much trouble with this wily monkey monster.

Bringing in an Ice weapon will give you a distinct advantage in this fight, gunning for its weak points, such as the tail or head will dish out even more damage, and the monster can be pretty susceptible to knockdowns if you make wise usage of exploiting when the monster balances on its tail, or if you wholesale knock it out. 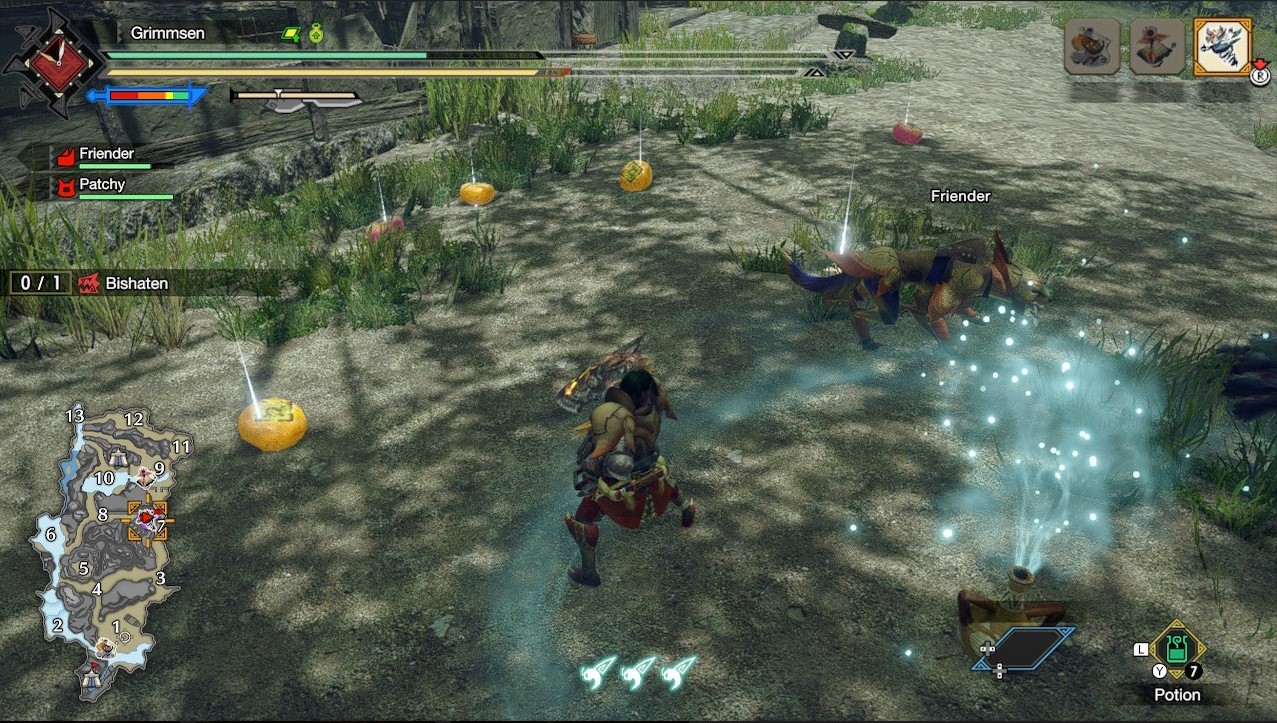 An additional “weakness” to this monster is by poisoning it by picking up its own fruit. The poison damage might do damage over time, but it is substantial and worth remembering in this fight.

How to farm Bishaten and get the Fur, Feather, Tailcase, Talon and Horn

The Tailcase is a 100% drop as a shiny if you manage to break the tail, which also happens to be a weak point. The Horn is an 80% drop, but be sure to be careful, as it can quickly retaliate.

The best weapon to bring in is surprisingly not a weapon that deals blunt damage, but one that deals slashing damage. If you manage to break the head, you have an 80% chance of picking up the Bishaten’s Horn. As with every farming guide, we recommend trapping the monster to net more rewards.