This Fanged Wyvern-type monster can inflict you with the incredibly deadly hellfireblight ailment, which could either make you spontaneously combust, or explode when hit. Pretty nasty, eh?

This flagship monster is incredibly deadly, and unrelenting. Even veteran hunters should have no shame in finding out how to beat Magnamalo in Monster Hunter Rise.

How to Beat Magnamalo in Monster Hunter Rise 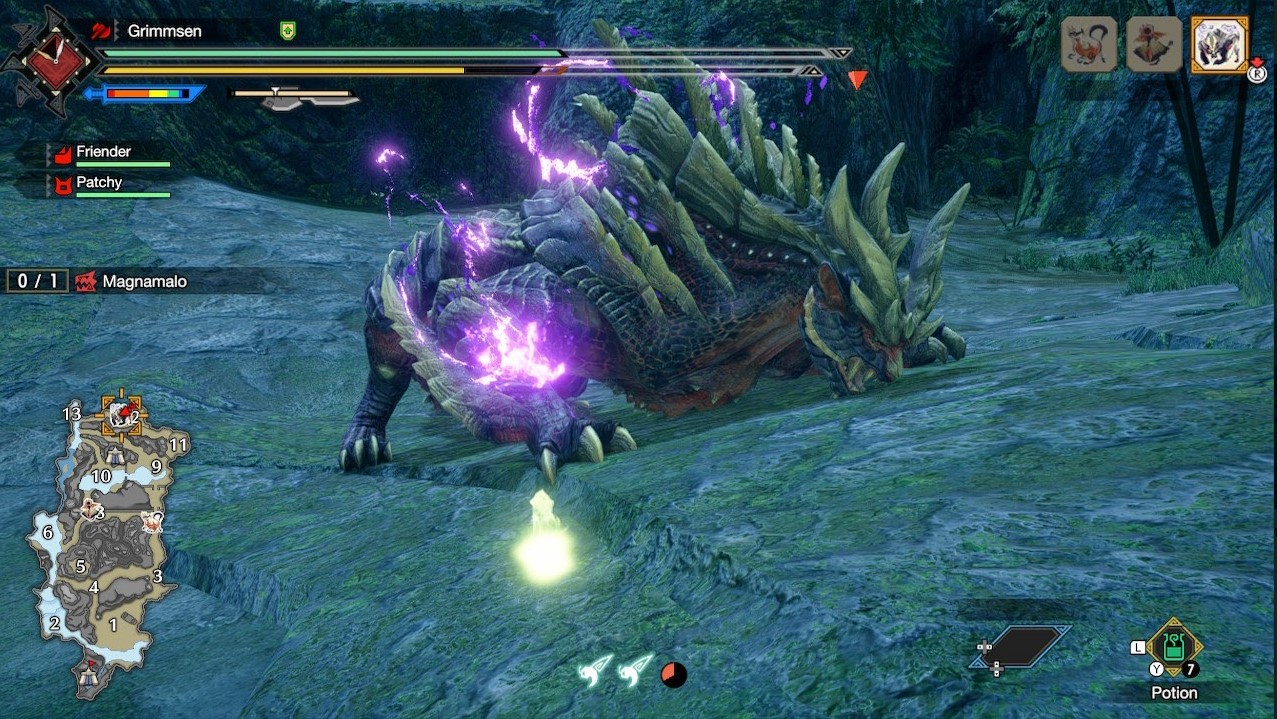 Magnamalo isn’t quite as scary as it seems when you first encounter it in the urgent village quest “Comeuppance”. You just need to know how to best counter its hellfireblight.

As the flagship monster of the game, it’s going to be the toughest fight in the game you’ve faced thus far, so even before thinking about taking down Magnamalo, you might need to grind some things out, first.

The key to every successful hunt is good preparation. Craft the best armour set suited to your weapon currently, and begin to upgrade it as much as you can. Be sure to keep an eye on what skills you’ll actually attain for the armor set, and pick whichever one suits your particular play style best.

Then, craft the best Water weapon you can. If your weapon tree doesn’t have any Water element weapons up to scratch, just go for anything that can dish out the most amount of raw damage, regardless of element. Then, craft Mega, Max and Ancient Potions, as well as some Deodorants, you’re going to need them.

With all your new weapons and armour, head to the canteen and eat for the following skills: Dango Defender, Dango Medic and Dango Weakener. These will give you the best chances of encountering a slightly weaker Magnamalo, increase your base defense stat, and make all health recovery items slightly more potent. With all that sorted, head into the quest.

The first thing you’ll want to do before facing the monster is to pick up any items from the item box, and pick up as many buffs from endemic life in the area as you can. 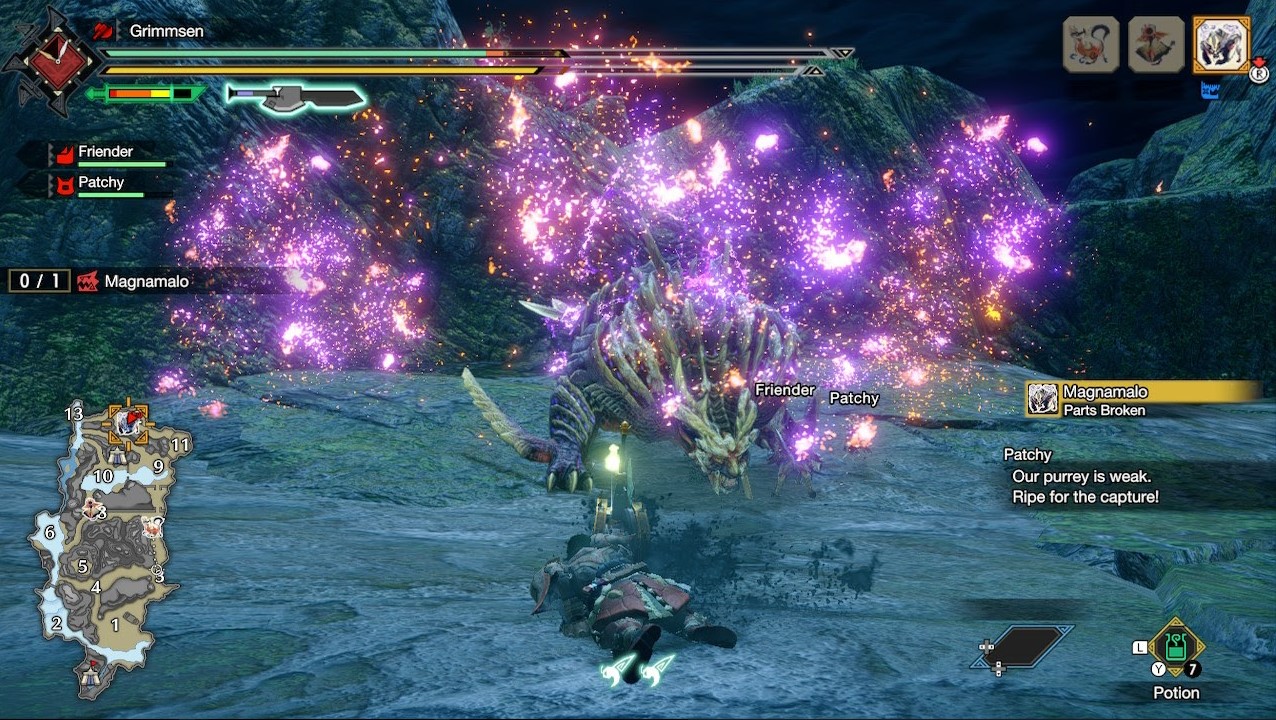 There’s a good route to Magnamalo you can do while on your Palamute, which will take you to the wall in area one, jump up and again for several buffs, then in this area follow the buffs, then head over to area 9.

Magnamalo will immediately roar, but not be in a state that will inflict you with hellfireblight, unless you’re hit by its tail. The tell for this attack is incredibly obvious, and Magnamalo will poise it’s tail at you.

This is your cue to Wirebug away in a horizontal direction and move in further to dish out attacks wherever you can. If you are hit, stay in range of its forearms and attack those as a weak point. After you’ve dished out enough damage, it’ll move zones over to area 12.

Magnamalo will eventually begin to crush the ground, and then inflict hellfireblight to anything nearby, so be sure to dodge around,it, to the main body or tail. It’ll likely follow up with a tail whip, so again, wirebug out of the way.

When Magnamalo becomes enraged, you’ll start to see purples flames emitting from its back and forearms. This is when it’ll really go for the hellfireblight attacks, pouncing around the arena to catch you in the middle of a hellfireblight cloud.

The best thing to do is to wait for an opening, and keenly dodge, Wirebug out of the way if you get caught by the hellfireblight, or use a deodorant.

Another strategy to employ in this scenario is to lay a bomb down in the arena and wait for Magnamalo to come to you, once you’re in prime distance from him with your weapon shoot or hit the bomb with kunai or your weapon to detonate it, unleashing its own hellfire on itself, and toppling the monster in the process.

From here, attack either the forearms or tail to dish out some heavy damage. We recommend capturing Magnamalo, as it’ll shorten the fight, and you might get a few more items in the process. 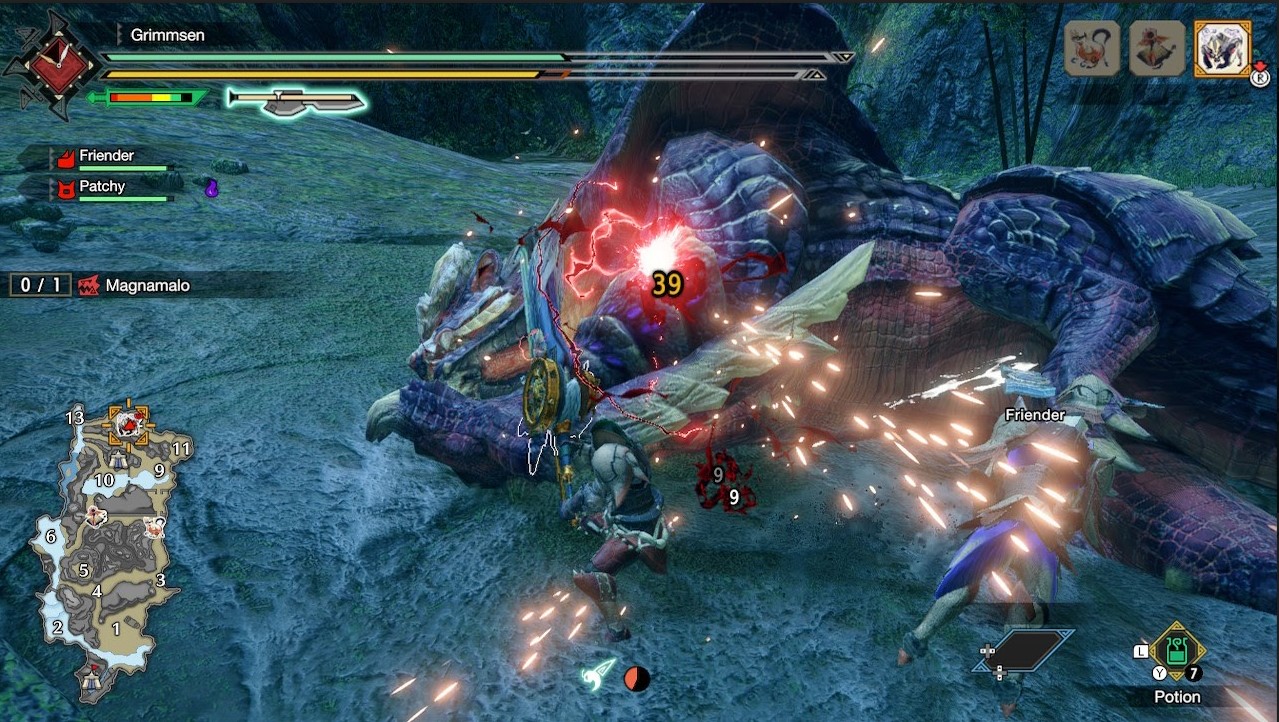 As we explained above, Water is somewhat effective against Magnamalo, and you should be taking either that or the highest raw damage weapon you can. Be sure not to use Blast against Magnamalo, as it is totally resistant to its effects. Bombs, on the other hand are a great way to topple the monster while mid-hunt.

How to farm Magnamalo and get the Plate, Blade, Tail, Scute, Horn, Shell and Scales in Monster Hunter Rise

Kit yourself out with as much of the Partbreaker skill as you can, and a sharp weapon.

From here, you’ll want to focus on cutting Magnamalo’s tail, in addition to its forearms and head. Focus on the tail first, which breaks easier than expected. From there, focus on the forearms when it’s enraged, and the head.

From there, use a trap to capture the monster for a few extra materials and do not forget to carve the tail when it is safe to do so.