Across 14 starting weapon types, each with a huge array of variations to mull over, choosing the best weapon in Monster Hunter Rise for you can be a daunting task.

But underneath the incredible amount of choice, thanks to some quality-of-life tweaks from Capcom, it’s easier to experiment than ever.

It’s often said that playing Monster Hunter with a different weapon feels like playing a different game – so if something’s not vibing with your personal playstyle, don’t hesitate to swap to something else.

With the Rollback feature at the forge, you can reclaim ingredients used to upgrade different weapons. This means you can test out whatever you like, safe in the knowledge that you can roll back to a previous incarnation and try a different weapon type.

Remember: the arsenal of different weapons in the Monster Hunter series tends to be pretty balanced, so you’re not necessarily shooting for a particularly overpowered set-up (at least until you’ve rolled the credits on low-rank hunts). 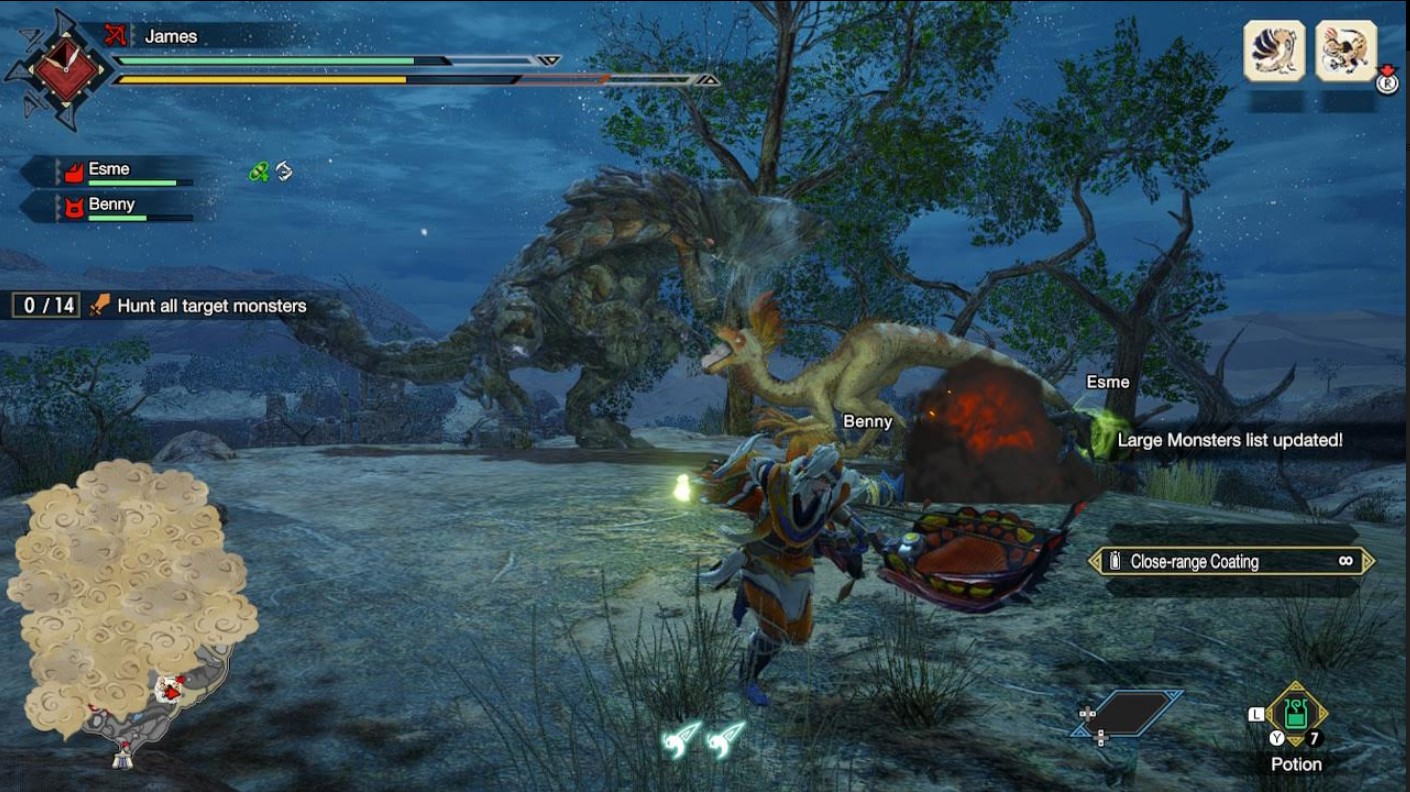 Below we’ll give a brief overview of every weapon, then go on to discuss some of the unique points of just five of our favourite weapons.

While this isn’t an exhaustive list of the nuances of every weapon, we will update the list with more picks should they emerge as dominant powers in the meta.

Right from the off, you’re equipped with a trusty Long Sword, but you actually have one of each kind available in your item box. The Long Sword is a decent beginning, but as we said, there are 14 different types to choose from, including:

From those brief descriptions, give whichever you like the sound of a try – there’s plenty of time to get to grips with each one in the early stages of the game.

However, it must be said, that even though each weapon in Monster Hunter Rise has a very distinct feel, that’s still within the framework of the game’s combat system as a whole.

Whichever weapon you choose, you’ll still have to live with the quirks of the series. You will still have to put each weapon away during battle to use potions for example, and they’ll still have the same chunky and deliberate style – just with different combos, nuances, and abilities.

First up is the Bow, which is a fantastic beginner weapon simply because it lets you keep your distance from difficult monsters while you get the hang of their movements.

This isn’t to say it’s the noob’s choice however, the Bow is an incredibly powerful and versatile weapon that works at any stage of the game. While aiming, if you press B and a direction on the left thumbstick, you’ll dash in that direction – letting you dodge or reposition without stopping your attack.

While the bow excels at constantly popping off lower damage hits in a near-constant stream, you can also press X and A together to unleash a powerful Dragon Piercer shot which fires a comically large arrow for an uber attack.

In battle generally, there are two main things to consider when wielding the Bow: optimal distance and coatings. 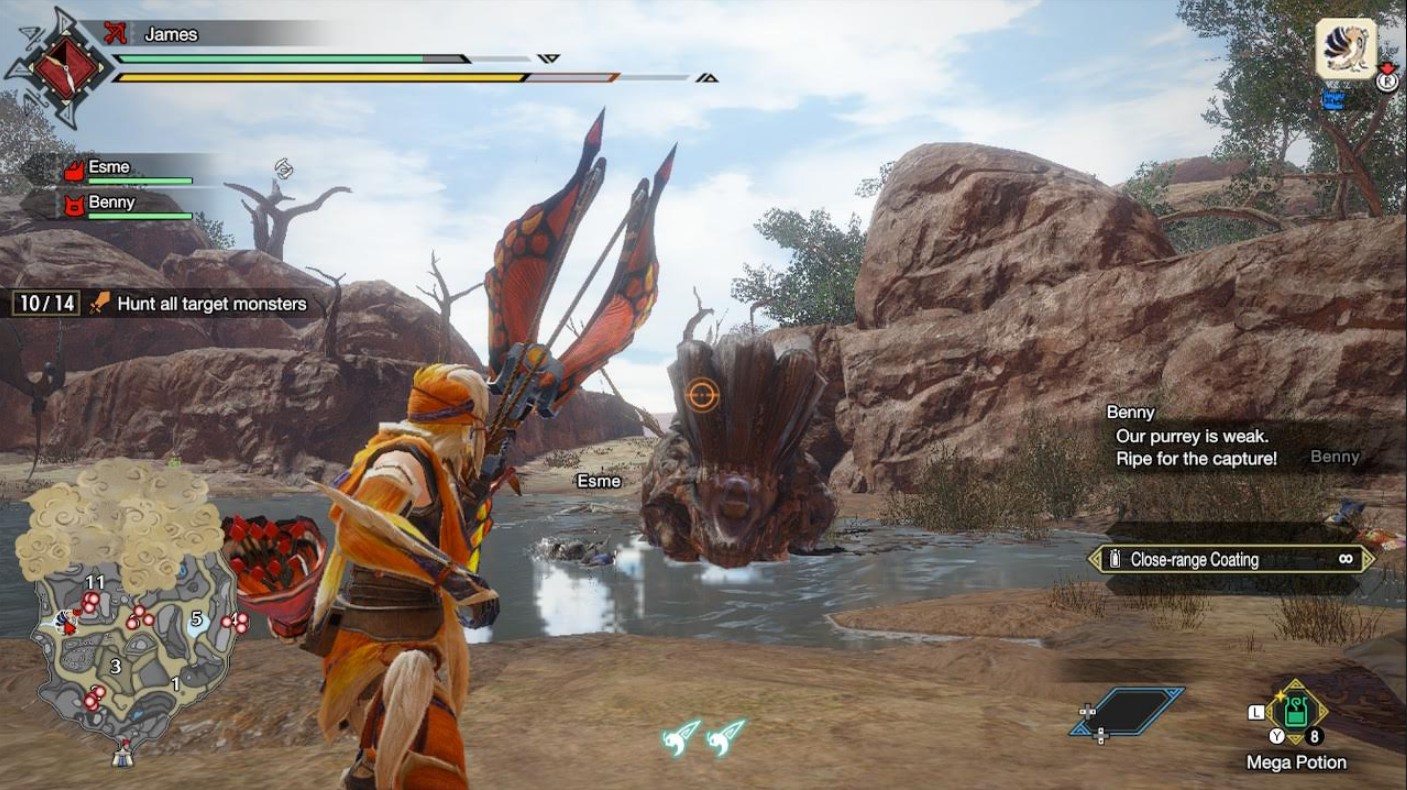 When you aim the bow, you’ll see a coloured reticle in the middle of your screen. If the reticle is green, then you’re the optimum distance from your target and will be dealing the most damage possible with your attacks.

Try to keep at the green distance to maximise your damage output.

As for coatings, these are special limited arrow types which imbue your attacks with status inducing damage. This could be drowsy Sleep Coating, monster-part-breaking Blast Coating, or Poison Coating which deals damage over time.

The Bow is a good choice if you want to play a mobile hunter who can tactically target different weak spots without constantly being trampled underfoot by large enemies.

Its mobility is only increased by the Focus Shot Silkbind attack (R + X), which makes you somersault backwards away from danger.

As well, you have the similar Light and Heavy Bowgun weapons at your disposal too.

They’re ranged weapons like the bow, but fire at different speeds and you have to reload their clips. Bowguns have a greater array of special ammo available, so if you’re playing in a team, you might consider one of these instead.

For players after a more up-close-and-personal experience, then the Charge Blade is a strong choice.

The Charge Blade can be wielded as both a defensive sword and shield and a huge offensive axe, switching seamlessly between the two based on combo inputs.

It can be complicated to get to grips with at first, but quickly becomes a lot of fun.

In sword mode, the Charge Blade can perform quicker, but weaker short combos of attacks, while also giving you the ability to hide behind your large shield with ZR.

But where the Charge Blade really shines is in the power and utility of the axe mode. 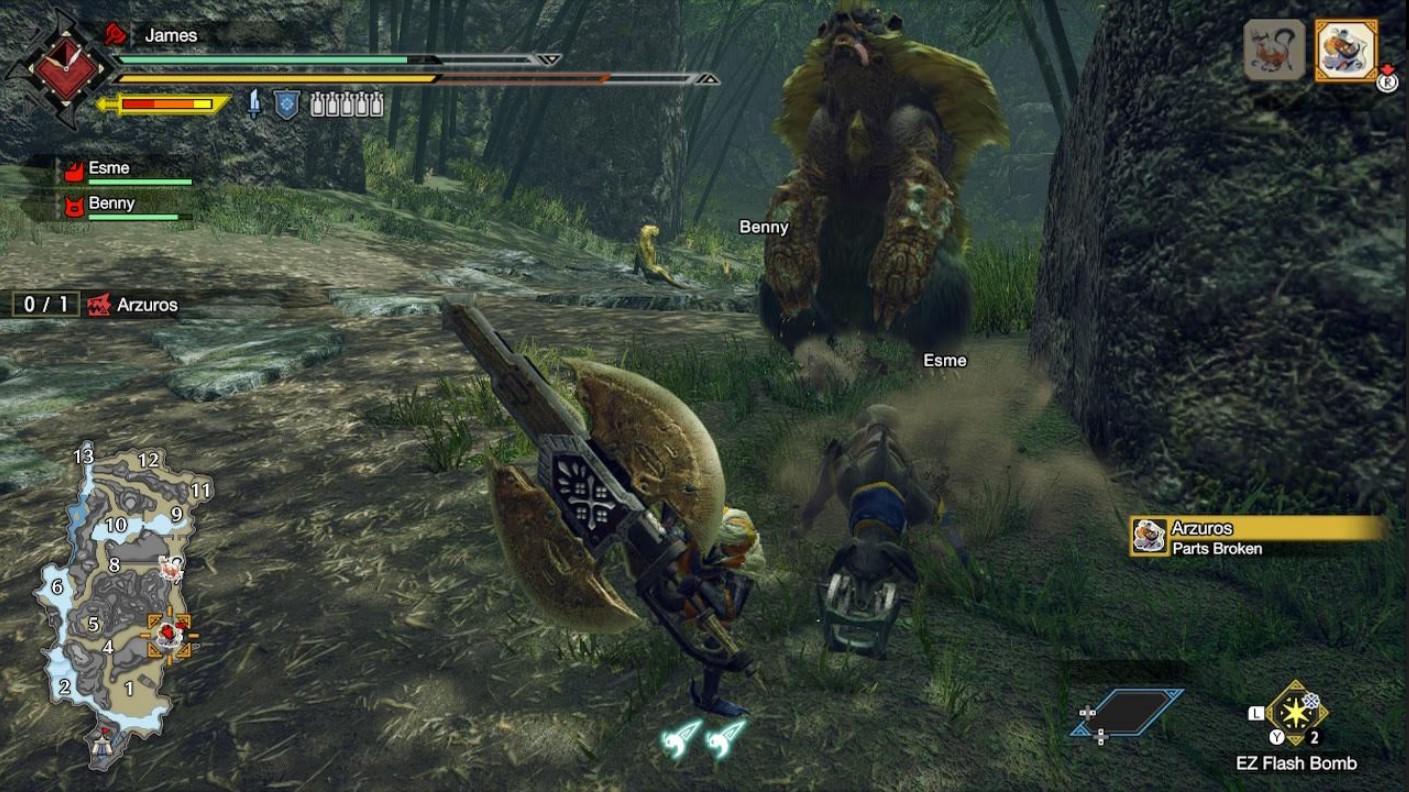 Connecting with normal attacks allows you to build up phials of elemental energy which you can then charge into your axe by pressing ZR + A.

Continue pressing ZR + A to unleash a strong and wide-ranging Element Discharge Combo, which deals an incredible amount of damage.

Changing from the sword mode to the axe mode offers a great amount of offensive capability. Pressing ZR + X performs a Morph Slash, which transfers you from one mode to the other and back again.

One of the weaknesses of the Charge Blade is its lumbering mobility in axe mode. However, with its Silkbind attack, Morphing Advance (ZL + X) chutes you towards an enemy with flying speed.

While it’s other Silkbind move, Counter Peak Performance (ZL + A), is another useful defensive tool.

Big damage numbers become the norm with the Charge Blade, but don’t let that fool you into thinking it’s just a heavy weapon.

The Switch Axe is a similar and also very good weapon, but with a much more offensive focus as it changes between a Greatsword and Greataxe.

The Long Sword is another weapon in Monster Hunter Rise that feels very complicated at first, but proves its offensive and defence worth once you understand what’s happening with it’s combos.

When you first pick up a Long Sword, you’ll wonder why your hunter keeps jumping backwards away from the monster, but after you’ve been stomped a couple of times the appeal of being able to dash away at a moment’s notice will become clear.

Pressing either X or A three times will give you some very solid basic combos, while three presses of ZR unleashes the powerful Spirit Blade combo.

There are three main defensive slashes that you can employ. Fade Slash is performed by pressing X + A at the same time. This does a normal slash attack, after which your hunter dashes a short way backward.

However, the cooler and more special options come after performing a Spirit Blade 1 by pressing ZR.

After you’ve pressed ZR, if you then press ZR + A you’ll do a Foresight Slash. This is where your hunter will dash a long way backwards to avoid damage, then rush back in with a strong, fast attack.

For even more utility though, press ZR once, then press ZR + B to perform a Special Sheathe. Here, your hunter steps backward and holsters their weapon.

From here you can either press B again to dive in a direction with your weapon already put away, so you’re instantly ready to drink a potion if you’re hurting. Or if you press X after a Special Sheathe (ZR + B) you perform a super-powerful Iai Slash.

The Long Sword is a flashy and versatile weapon with a lot of plus points that are well worth exploring.

One of the more unique weapons on the roster, the Insect Glaive is made up of two parts: a more conventional spear and a customisable insect friend called a Kinsect, who has a variety of uses.

Aside from basic slashing combos, the glaive portion is really good at launching your hunter into the air, since you can vault by pressing ZR + B at any time.

Once you’re in the air you can press variations of A and X to keep yourself there, dealing flashing aerial damage over a number of moves.

You can also use ZL + X to perform a Silkbind Vault which further softens up a monster for riding.

Regarding the Kinsect part of the Insect Glaive, your goal is to shoot your bug at different parts of a monster to gather and harvest ‘Extract’.

When you recall your Kinsect, you’ll gain buffs from the Extract depending on where you hit the monster you’re fighting. 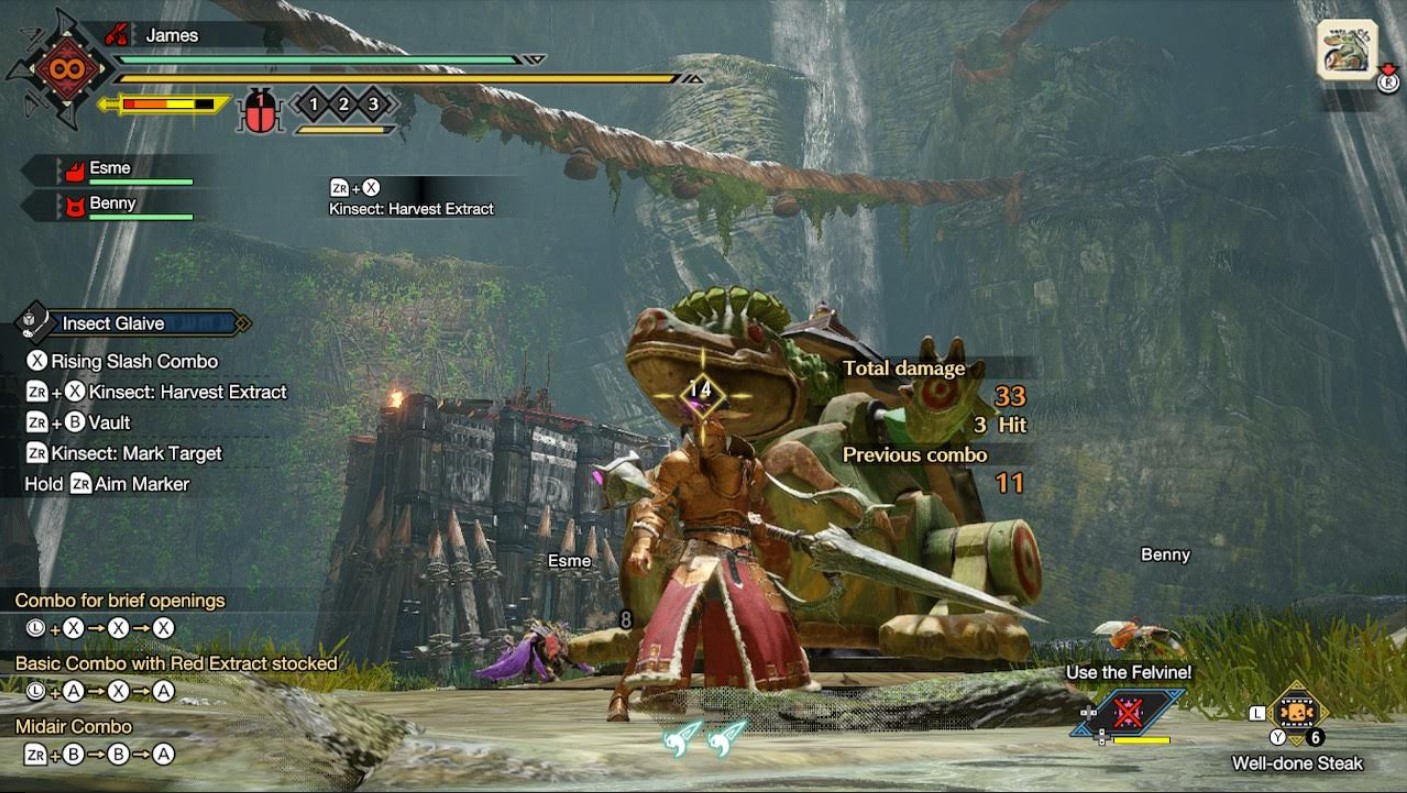 You can see which bug buff you’ve collected in the top left corner of the screen. Red 1 is an attack buff which increases damage and makes your combos better. White 2 increases your movement speed, while Orange 3 is a defensive resistance to getting knocked down by monster attacks.

Red 1 is usually gathered from a monster’s head, while White 2 is collected from most of the rest of their body, while Orange 3 is gathered from vulnerable places like their belly.

To gather these Extracts, you need to hold ZR to aim the Kinsect, then press X while holding ZR to shoot it towards where you’re aiming. Then you press ZR + A to recall and absorb the Extract.

You can also do a defensive dodge with recalling your Kinsect by pressing ZL + A.

The Insect Glaive offers a customisable, very different and engaged playstyle which might not be to everyone’s taste, but has a lot of mechanical complexity for those looking for a challenge.

Where the other weapons we’ve discussed have been big and chunky, there are options in Monster Hunter Rise that are a little smaller and quicker.

In basic terms, the Dual Blades can be said to be built around ‘Demon Mode’, where you can let off unending streams of fast, powered-up attacks with increased mobility at the cost of your stamina constantly draining.

Demon Mode is activated by pressing ZR, then you can perform a Blade Dance by pressing X + A together. 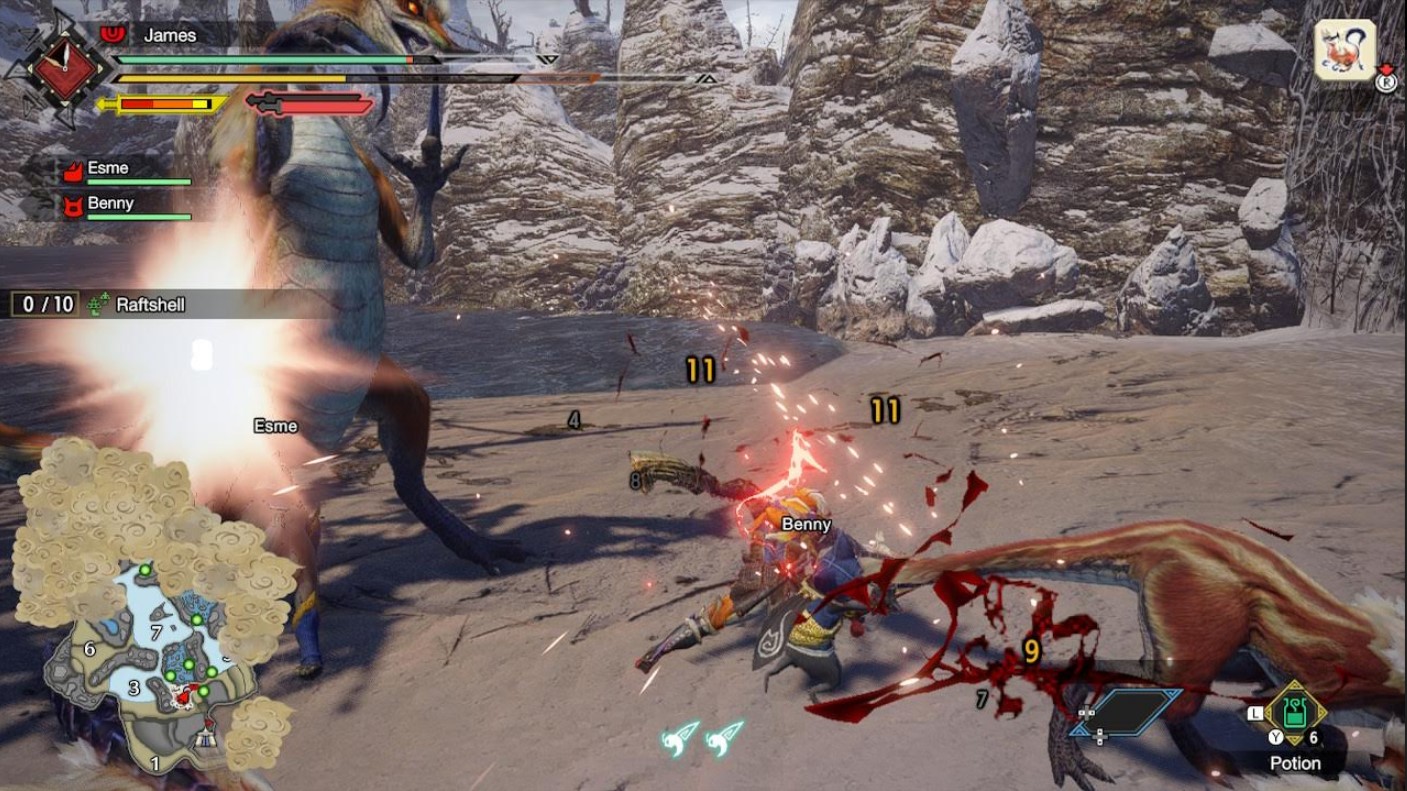 Finally, you can soften enemies up for Wyvern Riding quickly with the Piercing Bind attack performed with ZL + X.

The post Monster Hunter Rise Weapons | How to choose the best starting weapon for you appeared first on VG247.