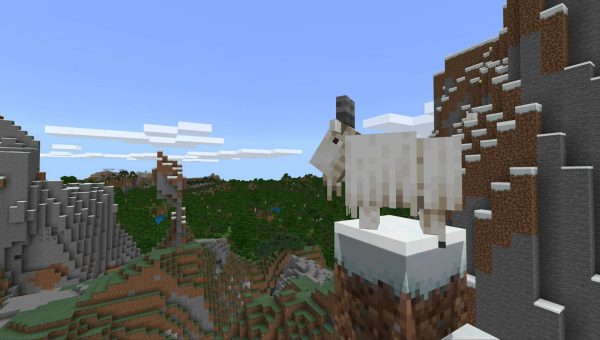 Mojang has announced a release date for the next Minecraft content update.

Caves & Cliffs Update: Part 1 for Minecraft will arrive on June 8, Mojang has announced.

It will also be available for the Java Edition on Windows, macOS, and Linux.

The update also includes axolotls which are confined to either water or a bucket that can aid you in battle, and the once exclusive Minecraft Earth mob, the glow squid, will also be in the game’s oceans.

Another new addition to the update is the mountain goat, which can head-butt you off cliffs, so be careful around the rather cute critters.

There will also be plenty of blocks with the update, some of which will pop up in the world, and others you will have to discover. If you want to find these blocks without exploration, you can always switch to Creative mode where you can access them all. This includes amethyst, dripleaves, and copper blocks.

Copper blocks will show age in the game, which we assume means it will at some point have a lovely green patina.

The update will also add the spyglass.

Known as the 1.17 update, the content was announced back in October 2020 and is so large, it is being split into two parts. Part 2 is expected later this year.

The post Minecraft Caves & Cliffs Update: Part 1 is out next week appeared first on VG247.