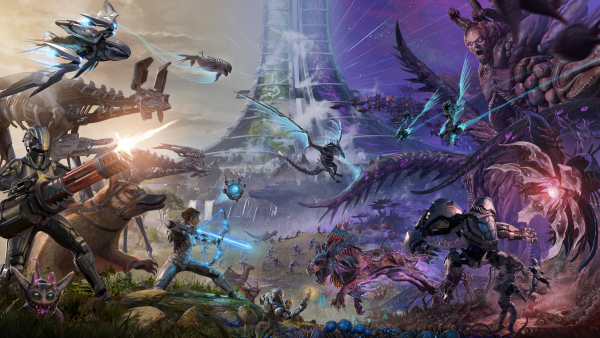 Ark: Genesis Part 2, the final chapter in the survival saga, has arrived.

The conclusion of Ark: Survival Evolved offers the largest map released, new missions, and a story that bridges the gap to the Ark 2 sequel.

In Genesis Part 2, you will explore a new world filled with new biomes and creatures, while participating in story-oriented missions that will test your survival skills.

It also features the final showdown between HLN-A and Sir Edmund Rockwell which takes place on a colonial ship traveling through space.

As previously mentioned, the expansion is a bridge between the current game and the recently announced sequel, Ark 2. Genesis Part 2 also introduces new voice actors to the Ark universe, with David Tennant (Doctor Who, Good Omens) playing the villain Sir Edmund Rockwell, and Madeleine Madden (The Wheel of Time, Picnic at Hanging Rock, Dora and the Lost City of Gold) taking on the role of robotics partner HLN-A / Helena Walker.

Genesis Part 2 is now available for download as part of the Genesis Season Pass on Steam, Epic Games Store, Xbox One, and PS4.

In addition to Genesis Part 1 and Part 2, the season pass includes a Chibi Noglin ​​cosmetic, a Chibi Shadowmane cosmetic, a new cosmetic armor set, and an in-game AI robotic companion named ‘HLN-A’ that you can scan additional hidden Explorer Notes, which can be found in the other Arks.